Because we stayed at opposite ends of Garstang last night we had walked 2 miles already before we met up with Dave, on the canal, near the A6 road. Dave, of course, would have walked the extra distance yesterday after leaving us. This morning I felt tired so getting out of bed was an effort. The weather was dry, sunny, not warm yet, but not as cold as yesterday. Pete was happy to walk again today, his last day, although he did insist on showing me a picture, on his phone, of the sole of his right foot, just as I was about to start eating my muesli at breakfast. It wasn’t pretty and I thanked him for sharing it with me.

Today’s walk was a straightforward one, following the Lancaster Canal from Garstang to Lancaster, with no deviation. Like yesterday it was mostly soft underfoot.

On good level walking, our pace can average about 3 miles an hour. That is something that hasn’t reduced with age. We’re walking, quite easily, at the same pace we did 30 years ago. Anything above 3.5mph and you’re getting ready to trot. Going too fast can cause you foot problems. Where I notice the difference as I get older is in the gradients. Climbing uphill takes more of an effort which I assume is age related. 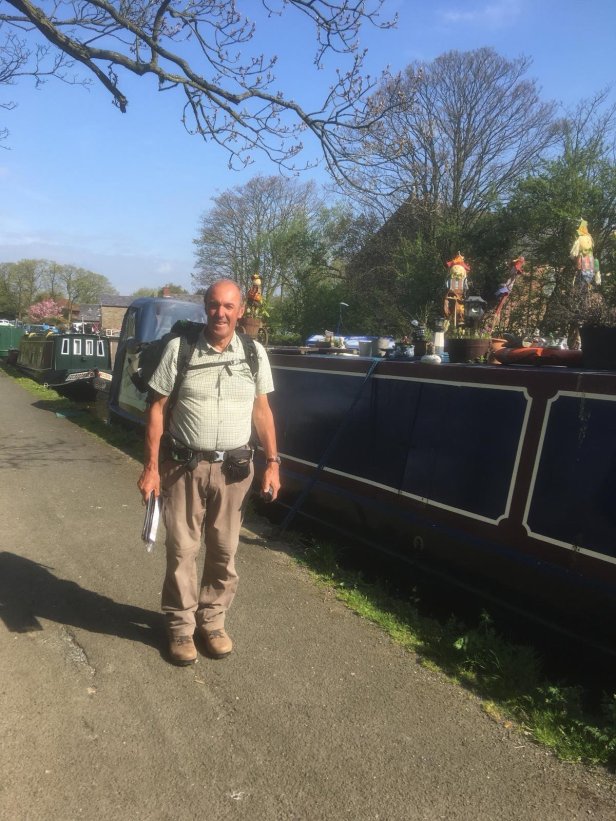 Near Potters Brook the familiar humming sound of the M6 motorway reminded me that it is never going to be too far away from me for the next few days. The canal itself had little traffic travelling on it. I did spot a duck with 16 ducklings on the water – a record for me on this walk. We also passed a field with a herd of alpacas… if that’s the correct collective noun.

Pete had identified a pub on the canal, in Galgate, The Plough, which got good reviews for lunches so we made that our target. Again, like yesterday, it was around the 10 mile mark. I haven’t had many lunches on this walk mainly because I’ve rarely felt hungry, and, if I’m on my own I don’t feel like stopping. We reached the pub at 1pm and treated ourselves to a light lunch and a rest.

The last 5 miles of the walk was pretty uneventful. I did encounter another long-distance walker, though, a very rare event as regular followers will know. He was walking south from Kendal to London, from Highgate to Highgate, he said, where his brother lived. Like me, he was intending to follow canals. His motivation was to celebrate turning 60 this year. He told me he had passed an 80 year-old man who had started his walk in Bristol. So, all of you out there who think you’re too old to do daft things like this, think again. Age does not have to be a barrier.

We reached Lancaster around 4pm and I said goodbye to Dave who was getting the train back to Glasgow. Pete returns home in the morning after 8 days keeping me company. I have one day on my own, then my cousin, Sergio, and his good friend, Eddie G, are joining me for 2 days, walking to Kendal then Shap.