John, Trevor and I all walked the short distance to Wolverhampton railway station this morning, but we were travelling in opposite directions. They were both headed south and home, I was going north back to Stafford to pick up where I left off yesterday. It took less than 15 minutes by rail to cover the 20 miles I walked the day before. Statistics like that can have you questioning your sanity.

Before I talk about the day’s walk I feel I must give a mention to an Indian Restaurant we found in Wolverhampton last night. Avid readers will by now have realised that I deliberately don’t comment on my accommodation, whether good, bad or indifferent. I’m just passing through, and they’re all trying to earn a living – the good ones will succeed without my endorsement. However, quite by chance, we stumbled upon a little gem of a place hidden in the city centre. The Indian food was some of the best that each of us had ever tasted and the prices were ridiculously cheap. Should you find yourself in Wolverhampton then Mystic Grill Dosa is well worth a visit. 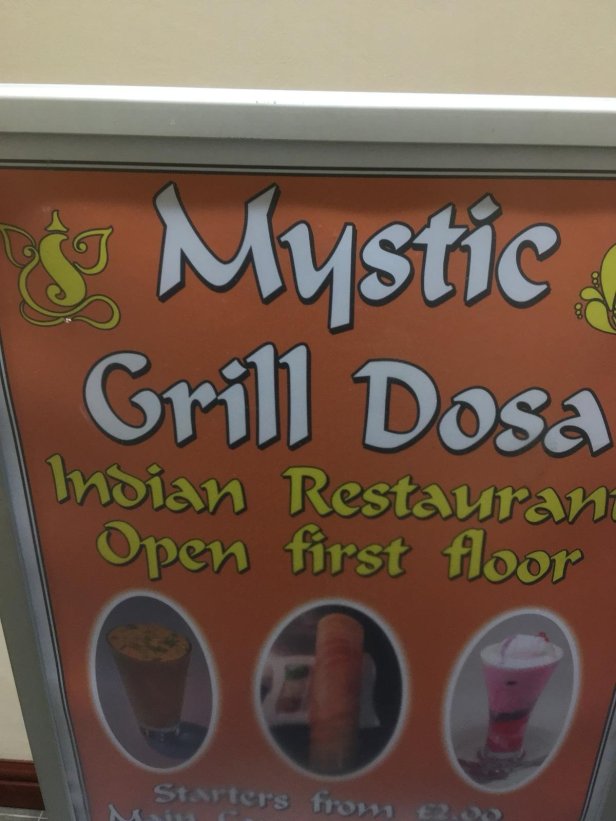 The road walk out of Stafford took me past the war memorial then the prison. I remembered that the last time I was in Stafford we all met up at a pub on Gaol Road, but I assumed the name was historical, not current. After leaving the built-up area I followed a quiet country lane for a short time and then took a bridleway at Newbuildings Farm, passing through a number of fields to eventually connect with the Trent & Mersey Canal. There had been some very light rain when I exited Stafford railway station. As soon as I had waterproofed myself and my pack, predictably, the rain stopped and the day brightened up. It was always thus.

Walking though the fields and along the canal towpath I was acutely aware of the wildlife and the farm animals, for some reason. There were young lambs in a sheep field – I’ve passed dozens of these scenes over the last 25 days – which made me stop and listen. I could hear the noise of wild geese, hidden from view by the high canal-side hedge. On the canal I spotted a duck swimming along with her 9 tiny ducklings.

On the flip-side, dogs are starting to treat me with suspicion. Yesterday, Trevor, who was ahead of me, patted a dog at the side of a moored barge. As I passed, it just about had my leg off. The owner looked about as aggressive as his dog, but it would still have ended up in the canal if it had tried to bite. As the dog backed off I heard the owner shout towards us something about being mad and stupid… I’m not sure if the comment was aimed at me or his dog! The reason I remembered this, was that a similar thing happened today, but, thankfully, the dog was on a moving barge in the middle of the canal. It almost fell in the water, and I found myself wondering if dogs are good swimmers or was I safe. 99% of the dogs I’ve passed are docile and friendly, but that other 1% seem to pick on me. Just one of the hazards of walking, I suppose.

The canal followed the floor of the Trent Valley bringing me in to the centre of Stone and my destination for the day. I have now left the Birmingham/West Midlands influence behind and well and truly entered ‘Potteries’ country, hoping soon to be approaching Manchester. Today was a short day which allowed me to catch up on some washing and book future accommodation. Followers will note that this is the first day to end up less mileage than planned.

Tomorrow I head for Kidsgrove (Stoke Talke) where I will meet up with Peter B who is accompanying me for the next 8 days. So, I have only been on my own for one night this section. Pete is one of my oldest friends, it being the two of us and George who did that first Way Walk together, the West Highland Way, thirty years ago in 1988. Little did we know what that first adventure would lead to. Oh, and I’ve clocked up 400 miles.