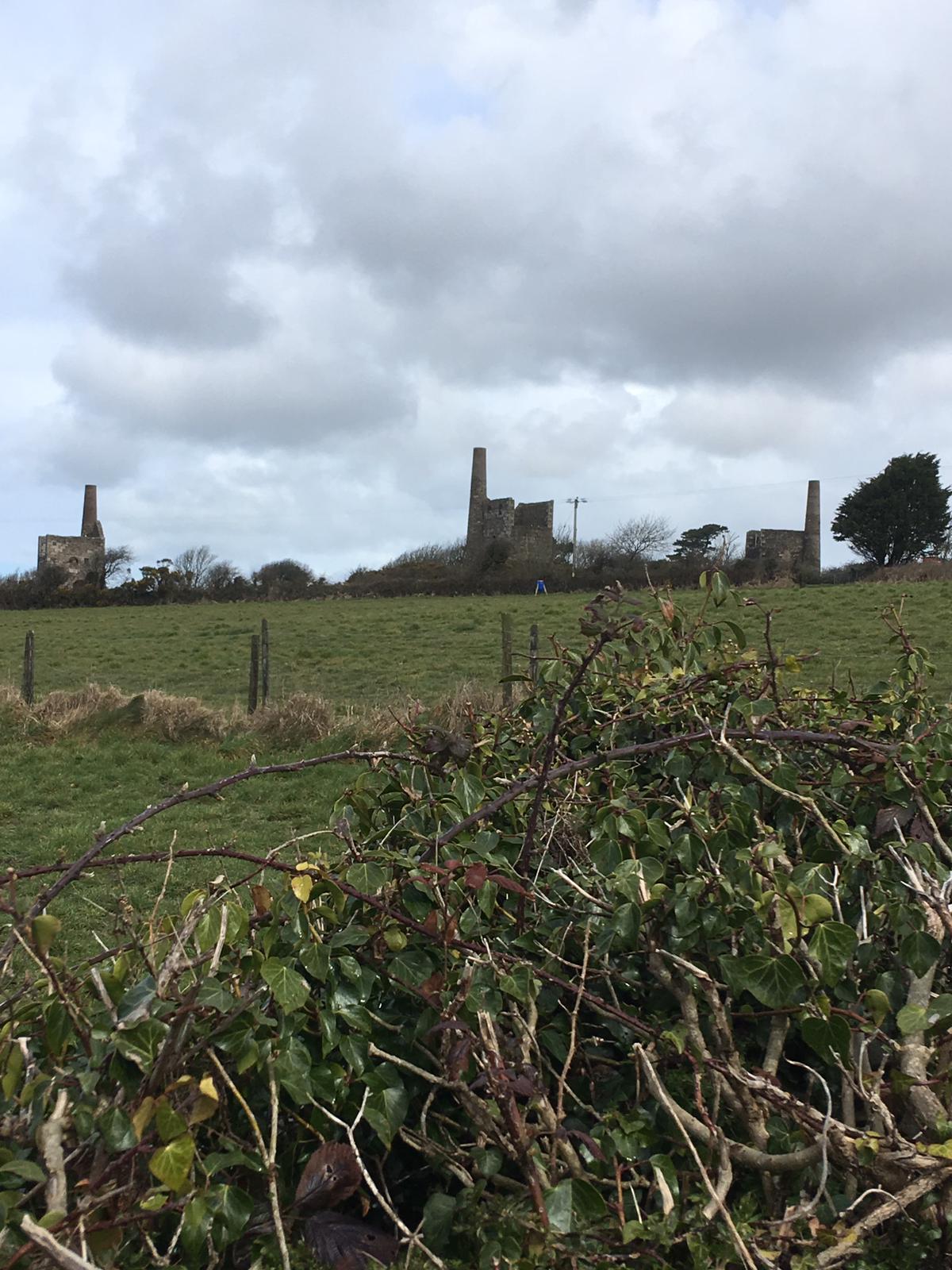 This is Christopher’s last day with me and it turned out to be a pleasant, if not uneventful, amble to the city of Truro, the county town of Cornwall.

The weather forecast was the usual ‘ showers ’ but it had been frosty overnight and we set off before 10am in dry conditions. Everyone we talk to tells us the same story, namely, that it hasn’t stopped raining in Cornwall since December, apart from when it snowed.

Our route took us north of Redruth following country roads and cycle paths. We also walked a part of the Coast to Coast cycle route, not to be confused with the 192 mile Coast to Coast walk in the North of England, which is a must-do for every true walker.

We walked past the Wheal Peevor tin-mining site near Radnor where tin and copper were once mined. The distinctive buildings with their tall stone chimneys are becoming a common feature of the landscape as we traverse Cornwall. As I stopped to take a photo of the structures a red deer bounded on to the road behind us. Before I could point the camera an approaching car scared it back into the hedgerow. I suppose you could say it ‘rebounded’. Anyhow, I didn’t get a photo so you’ll just have to take my word for it.

We thought we could stop for a coffee at the pub in Chacewater, The Kings Head. It had large signs saying it served food all day, every day, from 12 noon onwards. Sadly this conflicted with the printed notice on the closed front door which stated that they opened at 2pm from Monday to Saturday. As it was just past 12.30 we decided not to wait. Maybe it’s a Cornish thing?

So we sat on a stone step further up the road and I shared my Vegan Cornish Pasty, that I had bought in Penzance two days before but never got round to consuming, with Christopher. I remember now that, as I ordered it, I asked the friendly lady serving me what was in it. ‘It’s just the same as the normal pasty, but without the meat’, she replied. I still don’t know what Chris and I were eating but we enjoyed it all the same.

Not long after that we were walking along the verge of a busy road, facing the oncoming traffic, as you’re supposed to, when we heard a small traffic bump maybe about 50 yards behind us. It was a minor shunt. There was a lingering feeling that our presence may have distracted somebody. Surely not?

We arrived in Truro shortly after that, having walked in shirt sleeves for most of the day with the sun splitting the sky. My face and head are tingling a little so I’ve put some of the hotel hospitality moisturiser on. I now smell of pina colada.

I’ll miss Chris’s company tomorrow but Sinéad needs him back.